My First Ever PCP rifle

This was the first ever PCP rifle that I built in early 1994, as a dare by a friend to see if I could produce a better Air Rifle. At this time I was sharing my time between working as a manufacturing consultant to industry and repairing air rifles for customers and local gun shops in the area.

It was not my first rifle however as at this time I was doing some freelance development for Brocock on their Air Cartridge system.I had previously made 3 Air Cartridge rifles and one experimental CO2 rifle. Two of the Air Cartridge rifles used the Saxby Palmer Lee Enfield type cartridges and one the later smaller Brocock TAC version. The CO2 rifle used the Sparklets Soda Syphon capsules as sold by Boots the Chemist in those days. I do not know the whereabouts of any of the previous rifles as they have probably changed hands a few times and of course the Air Cartridge ones; now would be illegal to have in this country, except on a firearms certificate.

Having built this one circa early 1994 whilst living in Holwell Dorset; it first came back into my life approximately Three and a half years ago when whilst sitting in a Hospital bed awaiting heart surgery my mobile phone rings and it was a stranger called Dave who informed me that he had found a rifle at a recycling centre that looks very much like a Fox but was quite different to those he had previously seen and what could I tell him about it. Which at that time was not very much.
However He and his good lady visited us at home, some weeks later and brought it along. After discussion I was asked to put it back in working order but he didn't want to spend too much in the process. This I was able to do as it only really needed a bit of tidying up, the mechanism freeing up and some seals to be changed. Which was quite remarkable considering where it was found.

20/12/2018 I get a phone call from a someone who introduces himself as Paul an Air rifle collector and that he got my number from Dave. He then proceeds to tell me about his collection of Black Fox rifles, of which he is very proud and says he wants to buy the one that Dave has and what can I tell him about it. We have an in depth conversation for around an hour and within a few days he meats up with Dave and becomes the new owner of the rifle. Paul and I keep in touch and he has since become a good friend.

During my original work on the rifle early in 2017 I mentally noted that there were other jobs that I would do if ever I saw it again. It needed refinishing and the auto cocking mechanism that worked as the breach opened, required redesign because as it was, recharging was notoriously difficult if the rifle ran out of air.

Towards the end of 2020 I get a call from Paul to say he has put the rifle on a carrier to get to me in the morning as it has run out of air and he was unable to recharge it. Can I do anything about it?I asked if he would mind me having it for a while and I would also do some of the other work that needed to be done, if I could work it, in with other things I was doing currently. This was agreed and thus, it spent the next few months in my workshop. Part of this time was to be thinking time for me to decide exactly what to do with the cocking mechanism to overcome the problem. I should begin by saying this was not a Fox rifle but it was the rifle from which the Black fox was developed some 12 to 18 months later. The name Black Fox came about later when I was looking through a list of, off the shelf, company names at my accountants in order to start manufacturing a new Air Weapon.

This rifle did have my very first Volumetric valve which eventually led to them being used in all other fox rifles including the latest fox 3 variant.

It had the very first of my Ergonomic air rifle stocks that were based on something I originally developed for use on crossbows. This is very much a Marmite type of thing you either love it or hate it but when used properly as I usually demonstrate, it really does enable an average shooter to improve his or her freehand scores. This is further enhanced by the balance point of the rifle being situated centrally between the shooters hands.This one was made from a piece of French Walnut, some of which to my surprise I still have in stock, even though the workshop is different.

This was the first of my rotary breach systems but unlike the Fox rifles that opened 30 degrees this one opened 90 degrees and simultaneously cocked the rifle so that upon closing, the rifle was ready to fire. Whereas the Fox rifles had separate cocking handles. Theoretically it was a superior breach to the one used on the PC1 rifles but it was much more complicated to make and at that time 4 axis CNC manufacturing facilities were not available to me. It was also not easy to change stroke lengths of the hammer for different calibre rifles.However now it has been redesigned and is working extremely well.I will use it on future rifles short demo PCP rifle video 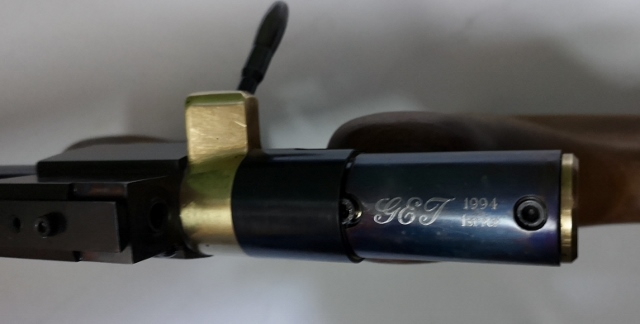 The power tube was the same tubing as that used for the Brocock Slim Jim pumps and the barrel was made from a Lothar Walther Polygonal .22 blank. Forward of the crowning the barrel is bored out and tapped 1/2" UNF for a male threaded silencer.
The body of this rifle was steel where as all later Foxes are Aluminium.
The trigger system is the first of my two stage, two element design but unlike all Fox rifles it is not interlocked with the breach as part of the usual safety feature.
The way the valve in this one works; is very similar to the fox rifles, in that if charged to 200 bar pressure, the power will be around 10.5 ft/lbs and it will gradually increase until the internal pressure drops to around 180 bar when it will peak at just under 12 ft/lbs where it will remain fairly constant for a several shots before gradually dropping by around 2ft/sec per shot until it reaches 80 bar. At which point many other rifles will spit the last shot out at well over the British legal power limit as all of the remaining air is exhausted at once. However the effect of having the additional volume in the valve means that in this case; If the rifle is allowed to drop to under 80 Bar then usually there will be a loud hiss as it exhausts itself but this will stop if the breach is opened and then it can be recharged as usual. If the breach is not opened at this point then it will fully expel all of the air in its cylinder. Therefore the best way to use one of these rifles is to keep the cylinder charged at between 100 and 180 bar pressure.

This Rifle is now on its way back to Paul, but having had it here for the last few months; I am beginning to wish it was in my collection, However I know that it is, in very good hands and will be for quite some time to come, I suspect.However if he ever does decide to sell it,I would be very interested in having a chance to get it back.